Plant a tree in memory of Arthur
An environmentally-friendly option 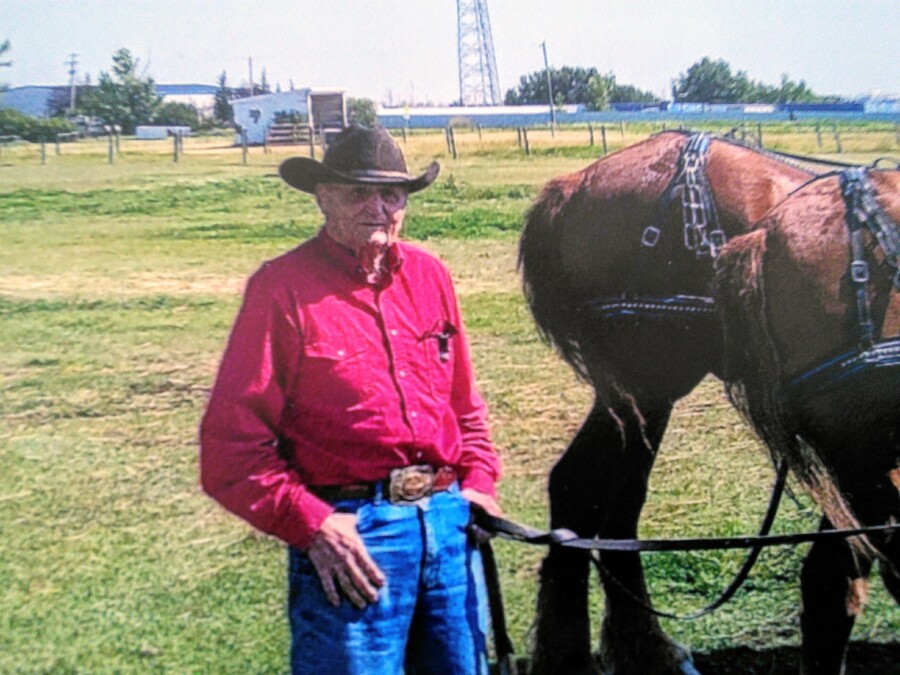 Arthur Hopp of Brooks passed away at Brooks Health Centre on March 15, 2021, at the age of 91 following a brief illness. He was born in Castor, Alberta to Theodor and Justina Hopp. Dad had various jobs from farming and ranching, lease rider to brand inspector. During the late 1960’s he started Chariot Racing and in 1971 his horses were used in the Disney Movie, Hacksaw. Dad married Bernice Westwick on June 16, 1984.  After retiring in 1987, Dad and Bernice bought a pair of Percheron Horses. They started participating in parades around Southern Alberta and in1992 they were honored to be asked to participate in the Calgary Stampede Parade. The Calgary Flames rode in his wagon a number of times in the Stampede Parade. Dad started the Log Skid Competition at Patricia Rodeo in 1993. Grampa’s Team was the transportation for his children’s weddings which he was proud to do. Dad was predeceased by his wife Bernice, parents Theodor and Justina, grandson Jamie Lawson, and great-granddaughter Mia Hopp, 5 brothers, and 1 sister. He is survived by his children Larry (Joanne), Randy, Reta (Brian), Joyce (Dale), Keith (Sandra), stepchildren Bea (Harvey), Pam (Iesmall) Loretta, Gene (Kelly), 20 grandchildren, and 28 great-grandchildren.

To the doctors and nurses that looked after Dad, a special thanks

Plant a tree in memory of Arthur by clicking here.
To send flowers to Arthur's family, please visit our floral store.

A service summary is not available

Plant a tree in memory of Arthur
An environmentally-friendly option

Plant a tree in memory of Arthur

2 trees planted in memory of Arthur

There is 1 photo available in the gallery

The cribbage players at the Prairie Pioneers send their deepest condolences to the Hopp family. He will be missed.

We are sending sincere sympathy to everyone who cared about Art & is feeling his loss. He loved our Grandma very much & we will be forever grateful for the life & adventures he shared with her.
Sheila & Shawna (Lawson)

A Memorial Tree was ordered in memory of Arthur Hopp by Sheila & Shawna (Lawson).  Plant a Tree

Sincere condolences to all of Art's family and extended family. He certainly was a well known and respected  Patricia resident.  Everyone enjoyed his wagon rides and his beautiful horses. He will be remembered by all who met him.

Keith and family, our condolences on the loss of your father.  May he rest in peace.

Plant a tree in memory of Arthur